My Cameras: The Praktica Nova I

I had written this post a few months ago for my other web site, www.roydresselphoto.com and while it works there I also thought it makes sense to post it here. Many of us have had a film camera that has become a part of our life as a photographer. These are tools that allow us to create our art and our memories and produce the negatives that we now want to create our digital files so we can share them with our family friends and of course, relive the memories that we have.

I bought my second 35mm camera, a Praktica Nova I during my freshman year in high school. That was sometime in late 1969. It was my first SLR. (single-lens reflex) It replaced the Universal half frame that I had been using for about a year. While the Praktica was a little rough around the edges, it was light years better than the old Universal.

Praktica was one of the better known of the East Europian camera brands In the late 60s. The designs were several years behind the Japanese in technology, but their price tags were much lower.  A comparable Japanese Maniya Sekor was selling for about $150 in 1970. The Praktica, made in East Germany, was just $64.95 when I bought it at a local department store called Two Guys in San Bernardino.

Praktica was a pioneer in the camera industry

The Praktica may have been behind in camera design but it had a long history. Made by a company called Pentagon, The Praktica name first appeared in 1939 with the launch of the Prakticaflex. That camera design was pioneering at the time. Wikipedia says “Despite being quite crude, the design constitutes the pattern along which virtually every subsequent 35mm SLR camera is built, regardless of the place of origin”.

Quite crude was a good description of the Praktica cameras. Operating under a communist system they had no real incentive to make a better product or a profit.  From what I have read they sold their cameras for less money then it cost to manufacture. This would have lead to bankruptcy in the west, but under communism that was not the case. The goal was to keep people coming to work, keep the shutters clicking and keep shipping goods.

The Praktica was my first 35mm single-lens reflex (SLR) The design uses a mirror to reflect the image coming through the lens up into a prism and to your eye. When the shutter is tripped, the mirror moves up out of the way and the light from the lens hits the film making the exposure. This design allows you to see what the film sees. You are looking through the same lens that takes the photo.

The Praktica was a giant leap forward from the old Universal that I had had for about a year before I got the Praktica. Being able to add other lenses and accurately focus was a big advantage. But, like the Universal, the Praktica had no built-in meter. I still needed to use a handheld light meter for exposure. That taught me a lot about exposure. Instead of having the camera automatically set the exposure for me, as we are familiar with today. I had to meter the light, then set the shutter speed and f stop by hand.

I soon bought a telephoto lens for the Praktica. Because zoom lenses were expensive and not very good at the time, I got a 135mm fixed lens. Now I could bring distant objects closer. My photographic world had expanded exponentially.

It sounds silly now, with our phones having three lenses and the cheapest cameras having a zoom lens built-in, but that feature did not come overnight. Technology marches slowly onward. In the late 60s and early 70s, there were no cameras with a built-in zoom lens. Most people bought easy to use, simple “Kodak Box” cameras having just a single lens and no exposure controls. You took photos in daylight, or you used a flash. Only 35mm SLR cameras and professional medium formats offered additional lenses and those were large bulky add ons.

When I backpacked the Pacific Crest trail in the mid-70s, I carried two cameras. One for color and one for B&W and three lenses. A standard 50mm, a wide-angle for scenic and a telephoto. The whole kit weighed in at about 15 lbs. When you’re carrying that on your back that makes a difference. Today my phone could do all that plus video, and weigh in at a few ounces.

The Praktica used lenses with what was known as an M42 universal screw mount. It was developed by Contax in 1949  and adopted by many other camera manufacturers. Think of it as something like Android or Windows today. The Universal Screw Mt. was used by a variety of camera manufacturers. Lenses were readily available and you were not restricted to one camera brand. You could buy a Mamiya, a Pentax, and a Praktica and use the same lens on all three of them.

It was a big plus for a young kid just out of high school that I could use the lenses from the Praktica on that Mamiya Sekor I got for a graduation present.

I replaced the Praktica with a Mamiya Sekor 1000 DTL

I used the Praktica for the four years I was in high school, with it I learned the art and science of photography. It went with me when I hiked the John Muir trail in 1972 and all the many hikes in the local Sothern California Mountains. Sometime in late 1972 or early 73, the standard 50mm lens broke. I replaced it with a cheap Russian-made 45mm Zenza. At about that same time I bought an Olympus 35 SP rangefinder camera that I used as a second camera for many years.

The Praktica was finally retired when I received a Mamiya Sekor 1000 DTL as a high school graduation present. A friend in my high school photography class bought the Praktica but I wish I still had it. As with lots of things I thought I would never want again. I would like to add to my shelf of old cameras in the office. eBay here I come. 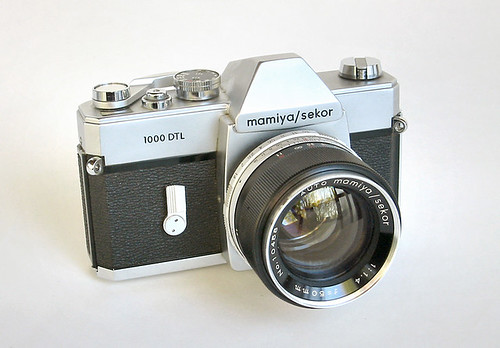 The Mamiya 1000DTL that replaced the Praktica in 1973.
image by Voxphoto (Image rights)